Jess has been around livestock and has held farm related jobs since her childhood. She traveled all over the country working on different farms learning to address various climate and land conditions, understanding different farming practices and philosophies and working on different types of farms. Her experience includes working at Squam Farm in Nantucket to bring back a sheep grazing production that was a large part of Nantucket’s history, managing a farm rehabilitation at Borders Farm Preservation Trust and managing calf rearing and animal care at Mil-bar Dairy Farm. Jess’s love of what she does is evident in the way she is greeted by the animals and the results of her food production.

All the animals on the farm have a purpose. Some are there to work, some are for food production, and some are used for breeding.

Rem is a nine year old border collie who has worked with Jess for 7 years to heard the animals. He came from Middleborough, MA where he worked with a trainer and qualified for nationals in herding. He became quite popular on Squam Farm in Nantucket where he herded over 100 sheep with Jess. He is definitely an entertainer who enjoys showing off his herding skills and charmed crowds at the Cranberry Festival in Nantucket. His roles on the Farm are to herd the animals – sheep, turkeys, chickens, pigs and lambs — on to new fields for new grazing, to help Jess when its time to feed the animals by keeping the animals at bay until the proper time, and to herd the animals into the handling area when Jess needs to care for them or into a trailer for transport. He also guards them while Jess is working with other animals. He is also an entertainer and enjoys showing off his herding skills.

Tressa is an eight and a half year old border collie and is a new addition to the Farm. She was recently rescued from another farm where she was working as a border collie, and is quickly adjusting to life at the Farm. She is focusing on assisting Rem and assists with herding and protecting Jess from the pigs, who can be very anxious for their food.

Jackson is Jess’s handsome 13 year old buckskin quarter horse from North Dakota. He herds the animals and will team with the border collies to herd or otherwise work along side them. He also serves as a guardian if there is danger lurking in the form of a predator. He is also an entertainer, as well as stately member of the Farm.

The guardian dogs live with the livestock and protect them from coyotes, bears, foxes, owls, hawks and eagles that all inhabit the area. Not only do they protect the animals but they assist the sheep when lambing, cuddling the newborns and cleaning them. They bond with the animals they protect, and are an integral part of making them feel safe and secure. If animal were to stray, one of the guardians would remain with it until it was found again.

The chickens and turkeys are on the Farm, not only to produce food, but help maintain healthy pastures. They, in essence, vacuum the pasture eating bugs, including parasites that exist on site. They also scratch the land which loosens the soil and thatch to promote healthy growth and renewal. Their waste in

the pasture helps to fertilize the fields to create better food.

This year, the Farm produced Cornish Cross and French Bresse Chickens, and Broad Breasted, Blue Slate and Bourbon Red turkeys for sale. Cornish cross is the breed you often see in the store, with a large amount of breast meat. French Bresse chickens have exceptionally tasty meat and are sought after by chefs worldwide. Broad Breasted is the turkey breed that you usually see in the store, also with a large amount of breast meat. The Blue Slate and Bourbon Red are heritage breeds. The heritage will have richer meat and more dark meat.

The role of the pigs is also to aid in land management. They renew hard to clear areas by rooting and tilling the land, and also devour and level ant hills! They also love to eat nuts, the apples dropping from the indigenous trees, left over vegetables and anything else!

This year, the Farm is again raising Large Black Pigs for sale. It is one of the rarest English pig breeds and is known for its lean meat and flavor.

The Sheep and Cows:

These animals also aid in land management and stewardship. They are pastured and used to clear overgrown land instead of using machines. Their waste helps to fertilize the new fields, reclaiming the forgotten land to help it become more healthy and nutrient filled.

This year, the Farm is raising its own herd of North Country Cheviot Cross lambs for sale. This breed is known for its lean, mild meat. 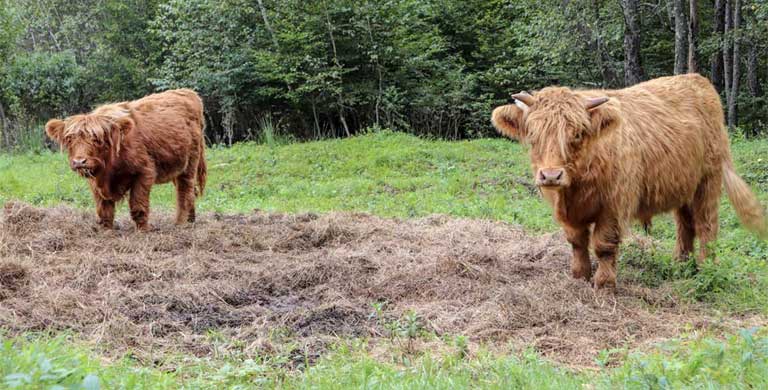